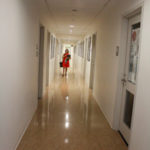 Bianka is a PhD candidate in Film and Media Studies at UC-Santa Barbara. Her dissertation explores media’s role in the discourses and practices of Cuban internationalism and South-South solidarity after the Cold War. Her research interests include media globalization and its effects on the Global South, Latin American and Latinx media cultures, post-socialist Cuban media, feminist and queer theories, and migration. She received an MA in Latin American Studies from Tulane University and BA degrees in Economics and Women’s Studies from the University of Florida.

Bianka is currently the Coordinating Editor of Media Fields Journal and has been an active member of the Media Fields Collective since 2013. She co-edited the journal’s twelfth issue on Media and Migration, published in January 2017, and co-organized the 2015 Media Fields Conference: Encounters. She previously worked as Editorial Assistant at the Media Industries Project at UCSB and as Graduate Assistant for the Cuban and Caribbean Studies Institute at Tulane University.