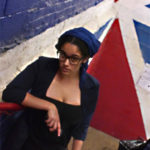 Corrigan Vaughan earned her BA in film from Vanguard University and her MA in American studies at Cal State Fullerton before landing in film and media studies at UCSB. Somewhere in there, she also took part in a study abroad program at Nelson Mandela Metropolitan University in Port Elizabeth, South Africa, where she examined representations of “coloured” people in South African television. Corrigan’s interests include TV, mixed race audiences, fandom, politics, identity formation, and indigenous media. Outside the classroom, Corrigan is a pop culture blogger and podcaster for ElectricFeast.com. Her work has also been featured on sites such as TeeFury and The Huffington Post.