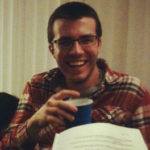 Jeremy Moore is an MA/PhD student in the Film and Media Studies Program at University of California, Santa Barbara. He graduated from University of California, Irvine in 2012 with a BA in English and completed both the Campuswide Honors and Humanities Honors Programs at UCI. His research focuses on television studies with an emphasis on the birth and rise of reality television, and he has worked on the interdependent relationship between game production and audience reception on shows like Big Brother and Work of Art: The Next Great Artist. His undergraduate thesis examined the history of Survivor as the evolution of the modern American narrative.