The Raw and the Husky: Music Vocal Qualia and Gender Politics in Post-Millennium Tamil Cinema 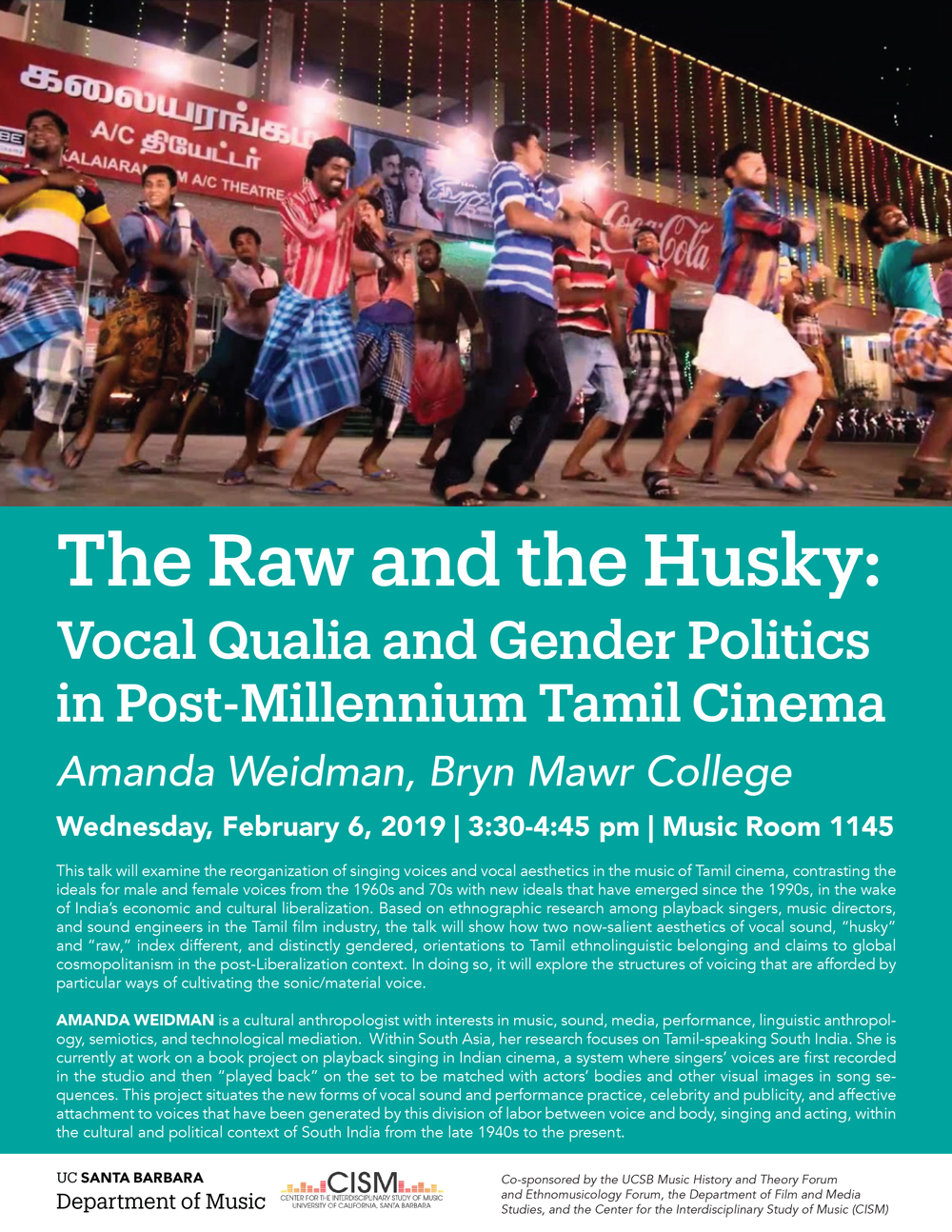 Amanda Weidman, Bryn Mawr College
Wednesday, February 6, 2019 | 3:30-4:45 pm | Music Room 1145
This talk will examine the reorganization of singing voices and vocal aesthetics in the music of Tamil cinema, contrasting the ideals for male and female voices from the 1960s and 70s with new ideals that have emerged since the 1990s, in the wake of Itndia’s economic and cultural liberalization. Based on ethnographic research among playback singers, music directors, and sound engineers in the Tamil film industry, the talk will show how two now-salient aesthetics of vocal sound, “husky” and “raw,” index different, and distinctly gendered, orientations to Tami ethnolinguistic belonging and claims to global cosmopolitanism in the post-Liberalization context. In doing so, it will explore the structures of voicing that are afforded by particular ways of cultivating the sonic/material voice.

AMANDA WEIDMAN is a cultural anthropologist with interests in music, sound, media, performance, linguistic anthropology, semiotics, and technological mediation. Within South Asia, her research focuses on Tamil-speaking South India. She is currently at work on a book project on playback singing in Indian cinema, a system where singers’ voices are first recorded in the studio and then “played back” on the set to be matched with actors’ bodies and other visual images in song sequences. This project situates the new forms of vocal sound and performance practice, celebrity and publicity, and affective attachment to voices that have been generated by this division of labor between voice and body, singing and acting, within the cultural and political context of South India from the late 1940s to the present.

Co-sponsored by the UCSB Music History and Theory Forum and Ethnomusicology Forum, the Department of Film and Media Studies, and the Center for the Interdisciplinary Study of Music (CISM)