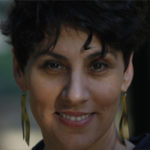 Regina Longo is the Associate editor of Film Quarterly. She has taught in the School of Film and Media Studies at SUNY Purchase, the department of Film and Digital Media at the University of California, Santa Cruz and the Film and Media Studies department at the University of California, Santa Barbara.   Regina is a professional film and media archivist, who spent six years at the United States Holocaust Memorial Museum (USHMM) in Washington, DC, where  among other projects, she was responsible for  managing the work restoring and reconstructing the outtakes of Claude Lanzmann’s Shoah.  She received her PhD from the Department of Film and Media Studies at the University of California, Santa Barbara and has published articles in The Journal of the Moving Image, Screening the Past and California Italian Studies. She also writes the “Page Views” column for Film Quarterly. Regina has devoted her professional skills to aiding archives at risk in various parts of the world. Regina serves as Co-chair of the Association of Moving Image Archivists Conference Committee, Special Consultant to the Albanian Film Archives and as the Director of ACP (Founding Director and Board Member)