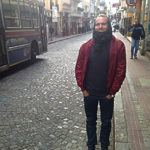 Alex Champlin is from Los Angeles. He received his BA in English and Sociology from the University of California, Riverside and his MA in American Culture Studies from Bowling Green State University in Ohio. He is currently an MA/PhD student in Film and Media Studies at UCSB. Alex has written about video game interfaces, apparatus, and network culture. His current interests include structures of play, software studies, piracy, and 1970s film theory. He is also actively involved with the Media Fields Journal Collective and works as a teaching assistant in Film and Media.