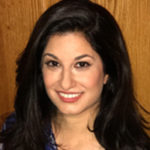 After graduation, Amy started as a writers’ assistant at Karen Sisco (ABC). It was here she met her writing partner Seth B. Cohen (Tulane University) and the two began working together. Their passion for comedy helped the duo to not only find representation, but to make their mark in writing. Their resume includes a feature sale to Walt Disney Productions as well as being on staff for a number of TV shows on: Netflix, Comedy Central, CBS, NBC, and CBS All Access. As of January 2018, Amy and Seth are currently Consulting Producers on Netflix’s American Vandal, where they have worked for the past two seasons and were nominated for a WGA award for season one.

Amy belongs to numerous film organizations including WOTV (NBC’s Writer’s On The Verge, Graduate 2012), WGA (Writer’s Guild of America), and UCB (Upright Citizens Brigade). She highly recommends JHRTS (Junior Hollywood Radio and Television Society) for newcomers to Hollywood. We can expect to see Amy Pocha continuing her passion for Television and expanding her writing portfolio.