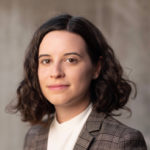 Charlotte Orzel is a PhD student and Chancellor’s fellow in the Film and Media Studies
department at the University of California, Santa Barbara. She received her BA in Film and Media from Queen’s University and her MA in Media Studies from Concordia University. Her Master’s thesis examined the development and branding of emerging exhibition practices at Canada’s monopoly exhibitor, Cineplex.
Her doctoral research focuses on the recent history of film exhibition in North America and the way shifts in exhibitor practice reflect changing industrial visions of cinemagoers. She has also written about film historiography, IMAX, cinema advertising, and the international ownership of cinema chains, and presented work at conferences hosted by the Society for Cinema and Media Studies, the Canadian Communication Association, and the Histories of Moviegoing, Exhibition and Reception scholarly network. She is also a co-organizer of Displays: 2019 Media Fields Graduate Student Conference.