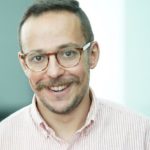 Daniel Grinberg received his PhD from the Department of Film and Media Studies at the University of California, Santa Barbara. In August 2018, he will be the Postdoctoral Fellow at the Center for Media at Risk at University of Pennsylvania’s Annenberg School for Communication. Previously, he received a M.A. in Communication and Culture at Indiana University and a B.A. in English Literature and Foreign Affairs at the University of Virginia. In between, he also taught English at a high school in France and embarked on an ongoing quest to watch every film in the Criterion Collection.

Currently, he is at work on his first book, Partial Disclosures: Documentary Media and the Freedom of Information Act, which examines how documentary media and FOIA disclosures mediate public knowledge of covert security and surveillance practices. He has also written on topics such as terror watchlists, virtual reality simulations, predictive security algorithms, and the militainment network of the Guantanamo Bay Naval Base. His research interests include government media and censorship, war and security media, surveillance, documentary media, media activism, and media and the environment in both U.S. and global contexts. He is also the co-editor of the “Surveillance States” issue of Media Fields Journal; the co-organizer of the University of California Humanities Research Institute “War, Security, and Digital Media” Graduate Working Group; and the co-organizer of the Power Dynamics: 2016 Media and the Environment Conference and Ruins: 2017 Media Fields Conference.