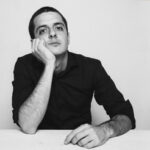 Giovanni Vimercati has received a BA in Film Studies from the London Metropolitan University and an MA in Media Studies from the American University of Beirut. His research focuses on the political economy of film and media. For over ten years he has worked as a film critic and his work, often under the pseudonym Celluloid Liberation Front, has appeared in Cinema Scope, Los Angeles Review of Books, Variety, The Guardian, Sight & Sound, Mubi, Film Comment, Cineaste, Reverse Shot, Filmmaker Magazine, and other international publications. From 2013 to 2018 he was the Sales & Acquisitions manager at Camera CDI, Italy’s leading distributor of current affairs and investigative journalism documentaries. He is a member of FIPRESCI, the international federation of film critics, and serves in this capacity on festival juries worldwide. For the Berlinale he has mentored aspiring film critics during the Berlin and Sarajevo film festivals. He is currently working on a book on the political history and economy of the film industry in Lebanon which will be published by Bloomsbury.