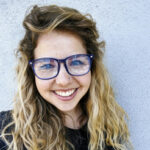 Hannah Garibaldi is a PhD student in Film and Media Studies at UC Santa Barbara. She received her Master’s degree in Film Studies from Chapman University with her thesis, “Chromatically Subverting the Production Code: Hollywood’s Colorful Weapon in the 1940s.”Her research interests include the intersection of Hollywood censorship and color filmmaking in the 1930s-50s, the establishment of accessibility standards in current cinematic exhibition, and the influence of physical illness, injury, and disability on historical Hollywood film productions. Hannah is also professionally involved in audiovisual archiving, having worked at the Paley Center for Media, the UCSB Film and Media Studies Archive, and the UCSB Library’s Special Research Collections.