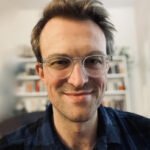 Mondays and Wednesdays 1-2pm by appointment

James McNamara is a television writer and a Lecturer in Film and Media Studies at UC Santa Barbara. McNamara is the co-creator / showrunner of THE ARTFUL DODGER, an international premium character drama for Disney+. He is also the creator / head writer of DETECTIVE COOPER, an international television drama series for Goalpost Pictures, Quizzical Pictures, and M-Net. Additionally, McNamara is the writer / director of a forthcoming audio comedy series for Princess Pictures and Audible. Other television work includes writers’ rooms for the Academy Award-winning See Saw Films, Matchbox Pictures / NBC Universal, Foxtel, ABC, and Endemol Shine. McNamara has consulted on features for Porchlight Films, Icon Film Distribution, and Fox Searchlight Pictures, and has twice been named an “international rising star” by BAFTA LA.

McNamara’s creative practice, teaching, and research focus on adaptation studies, with a particular interest in screen adaptations of Shakespeare. His essays and criticism have appeared in the New York Times, Washington Post, Times Literary Supplement, and Australian Book Review, where he is a past member of the editorial advisory board. In 2018, he was guest editor of ABR’s film and television special issue, and he received the Ian Potter Foundation Fellowship, one of Australia’s major awards for cultural criticism, for his work on early 21st-century US cable television. Prior to coming to UCSB, McNamara was the Junior Dean of Pembroke College, University of Oxford.