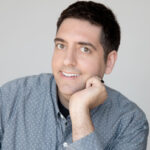 Justin Matson is a Los Angeles based comedian who likes to be gay in his free time.

Back when he was skinny, he won the title of “New York City’s Funniest New Comedian” and performed regularly at the Comic Strip Live.
Once he got fat, he toured his critically-acclaimed stand-up show FATTER THAN YOU THINK to sold-out crowds in North America, Australia, and the United Kingdom, and won 3 Roast Battles at the World Famous Comedy Store. He even won the Behind The Bits Virtual Comedy Contest!

Sure, his last show won “Best National Act” at the Pittsburgh Fringe, but he’s more excited about his new motivational stand-up comedy hour, Try Harder, which he has toured in Edinburgh, Helsinki, New York, and Los Angeles, and is currently adapting into a comedic self-help book.

If you really want to get technical, he also co-created the daily Instagram series @EASIERMOVIES, worked as a sketch writer for WEMASH and ALLCAL, and wrote and starred in a choose-your-adventure interactive comedy horror spoof, SCARY DEATH HOUSE, which was a finalist in the LA Scripted Comedy Festival. He currently cohosts the weekly internet game show, TOPIKILL, and performs regularly on the FULL DORK network.

Originally from San Diego, Justin graduated with a BA in Film Studies at the University of California, Santa Barbara after studying abroad at the International Christian University in Tokyo. He started his career as a personal assistant to Grammy winning former VP of Warner Music Group, Danny Bramson. He later worked as a production assistant for GSN Live at the Game Show Network, then packed everything he owned into his Honda Fit and drove across country to pursue a comedy career in New York City. Working for 3 years as an Associate Producer in New York, he helped launch the world premiere of Tennessee Williams’ final full length play, In Masks Outrageous And Austere. In 2013 he moved back to LA and has since been working as an Executive Assistant at Warner Bros. in Burbank.

He’s also graduated from the Upright Citizen Brigade’s sketch and improv program, written and performed on two house sketch teams at The Pack Theater in Los Angeles, and was featured as a guest comedian on FUSION TV (The Morning Show). He’s slated to star in an upcoming indie feature set to film in May 2021.