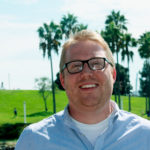 John Vanderhoef is an Assistant Professor of Film, Television, and Media in the Communications Department at California State University, Dominguez Hills. He holds a PhD from the Department of Film and Media Studies at the University of California, Santa Barbara. His research interests include indie media, digital labor, media industries, power and resistance, and discourses around gender, race, and sexuality in media and production cultures.

John has published work in journals like Television and New Media and Ada, and in edited collections like Production Studies The Sequel and The Routledge Companion to Video Game Studies.

His book, Passion, Pixels, and Profit: The New Creative Economy of Indie Game Production, released through the University of Michigan Press, explores the development, distribution, and promotion of indie video games in the 21st century within a framework of neoliberalism and romantic individualism.

John is also an avid gamemaker himself. His short narrative games, which he refers to as game poems or short story games, explore a range of subjects from parenthood to existentialism to death, but all share a general critique of dominant paradigms of the commercial video game industry. John’s games have been featured at festivals and exhibitions including Slamdance DIG, the Hand Eye Society’s WordPlay Game Showcase, LA PlayDate Game Showcase, and PixelPop Festival.