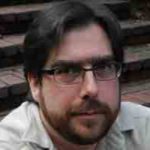 Johnny Shaw was born and raised on the Calexico/Mexicali border, the setting for his novels DOVE SEASON, BIG MARIA, and the upcoming PLASTER CITY. He has won both the Spotted Owl Award and the Anthony Award.

Johnny also acts as the editor-in-chief and is a frequent contributor for the online fiction quarterly BLOOD & TACOS, a loving homage to the men’s adventure paperbacks of the 1970′s & 1980′s.

Johnny received his MFA in Screenwriting from UCLA and over the course of his writing career has seen his screenplays optioned, sold and produced.  As a playwright, his stage collaborations with actor Jaime Arze, NATURAL ACTS and A GOOD KIND OF CRAZY, have been performed throughout Los Angeles.

For the last dozen years, Johnny has taught screenwriting.  He has lectured at both Santa Barbara City College and UC Santa Barbara.

He is the owner of Johnny’s Used Books, formerly a brick-and-mortar bookstore in Los Angeles, now entirely online.