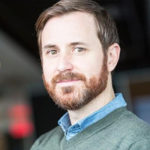 His work has appeared in Social Text, Discourse, Film Quarterly, Sarai, Cinema Journal, and the Media Fields Journal, among others. His co-edited a collection (with Bhaskar Sarkar), Asian Video Cultures: in the Penumbra of the Global (Duke University Press, 2017), has been called a “fundamental reference across media studies” and “a milestone collection.” He is currently completing a book manuscript – Faking Globalization – exploring media, urbanism, and popular politics in China, and at work on new projects on postdemocracy, technological intimacy, and video theory.

He previously taught in the Department of Modern Culture & Media at Brown University, and was a Mellon Postdoctoral Fellow at the Jackman Humanities Institute, University of Toronto.