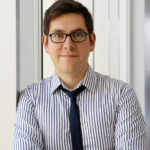 Juan Llamas-Rodriguez’s research and teaching mobilize media theories to critically analyze social phenomena on a global scale. His areas of specialization include transnational media, digital labor, border studies, infrastructure studies, and Latin American film and television. Two current projects address these concerns. The first, Trafficking Tunnels and the Infrastructures of the Border, is a monograph and online mapping project that argues for underground tunnels as media figures that reimagine the stakes in border-making processes. The second is Pornoscapes of Migration, a multimodal project that examines how emerging media, from pirate video to virtual reality, potentiate and restrict affective forms of engaging across transnational difference.

Dr. Llamas-Rodriguez has published in the journals Feminist Media Histories, Film Quarterly, Flow, Jump Cut, and Cinema Journal. His work also appears in the edited collections Geoblocking and Global Video Culture, Cultures of the Copy, and the Rutledge Companion to Risk and Media. He is a member of the Global Internet TV Consortium, a network of media studies scholars seeking to understand the implications of internet-distributed television around the world.