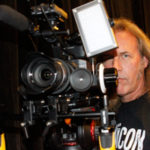 A native-born son, I first set foot on UCSB property in 1987 as a guitarist in a heavy metal band performing at the Lagoon, various Frat houses and The Graduate. Every stuggling musician eventually has to find a day gig, and I ended up at Seymour Duncan Manufacturing — and so began my production career. After producing and directing SDM’s product marketing and trade show videos, I was hooked, especially when I saw them exhibited on a 10 foot by 10 foot wall of televisions. Since then, I’ve been a camera operator, production assistant, floor director, promotional producer – you name it, I did it – for live broadcast network news stations. I found my way home five years ago, and have been applying my hand at being – writer, producer, videographer, director, lighting specialist, editor, audio engineer, and most difficult of all, critic; it’s next to impossible to be objective when it’s your own work! After producing a stream of public broadcast shows, I found what everyone wants – a profession where you can bring everything you’ve learned over the years and put it to use doing what you love to do. Twenty years later, I’m back at UCSB, behind the scenes instead of in front of it, a member of the Department of Film and Media Studies