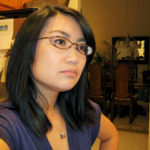 A recent graduate from the Comparative Media Studies program at the MIT, Lan holds a Masters of Science in Media Studies (2009) and a Masters of Public Health from Boston University (2007), specializing in Health Policy & Research. Formerly on track to become a scientist, Lan turned down admission to medical school to pursue her interests in media. While at MIT, she worked for The Education Arcade designing pedagogically-rigorous learning games in math and science, an extension of her work in public health policy concerning media interventions on childhood obesity. Lan’s research interests have included East Asian diasporic media communities (Asian TV dramas) and the aesthetics of melodrama and spectacle in television, graphic art (anime/manga), and video games. At present, Lan’s projects examine paratextual forms of historical “writing” — such as geotagging/graffiti and paleontology — and (re)production in film adaptations and technologies of representation, such as the scanner. Lan is currently working to complete her doctoral degree at UCSB’s Film & Media Studies department as a Chancellor’s Fellow.

Upcoming Publications: An article arguing for games as a form of cognitive technological intervention in learning for Cognitive Technology Journal.