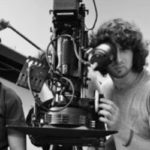 Since graduating in 2010 Leigh Mierke has been working in varying capacities in on-set lighting. He has been a member of IATSE 728 set lighting union for the last 5 years, and just wrapped his third season of Jane the Virgin for the CW network. On August 28, 2016 Leigh married his Gaucho sweetheart Lisa Shapiro on the UCSB campus. In the coming year Leigh looks forward to his fourth season on Jane the Virgin, as well as the possibility of becoming a UCSB instructor for the FLMST 112 lighting Class. He is a Gaucho ’till he dies and bleeds blue, white, and gold.