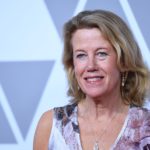 As Producer, LISA BRUCE has made feature films both domestic and internationally, both independently and with major studios.

In 2018 Bruce is once again nominated for both an Academy Award for Best Picture and again for 2 BAFTA’s for Best Picture and for Best British Picture for her newest feature, “Darkest Hour” directed by Joe Wright and starring Gary Oldman, Kristin Scott Thomas, Ben Mendelsohn, Lily James, and Stephen Dillane. She teamed up once again with writer Anthony McCarten and producer Eric Fellner at Working Title to make this feature film focusing on Winston Churchill’s campaign to stand against Hitler.

Prior to that, Bruce produced 15 feature films including the Working Title and HBO telefilm “Mary and Martha”, directed by Phillip Noyce, written by Richard Curtis and starring Hilary Swank and Brenda Blethyn. Previously for HBO, she had produced “Walkout”, starring Alexa Vega and Michael Pena, about Mexican American activism for which director Edward James Olmos received a Directors Guild of America Award nomination.

Bruce was the co-producer of Gavin O’Connor’s breakthrough feature, “Tumbleweeds”. The film’s young star Kimberly J. Brown won the Independent Spirit Award for Best Debut Performance and lead Janet McTeer was nominated for the Academy Award® for Best Actress and won the Golden Globe. Tumbleweeds was cited by the National Board of Review as one of the year’s 10 Best Movies.

Bruce was a founding partner of Orenda Films, a New York-based company for which she developed and produced internationally-released feature films including Sam Henry Kass’ “The Search for One-Eye Jimmy” and Buddy Giovinazzo’s “No Way Home” starring Tim Roth.