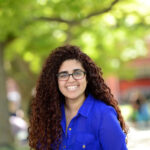 Mary Michael is a PhD student in the Film and Media Studies Department at USCB. Her research focuses on histories of technology, infrastructure, and data in the Arabian Gulf. Her research interests include critical data and information studies, indigenous technology, digital and new media, Middle Eastern media, critical games studies, and biopolitics. She received a B. S. in Sociology/Law and Society from the University of California, Riverside. She received her M.A. in Cinema and Media Studies at the University of Southern California. Mary also works as a media practitioner. She has produced small, experimental games with Twine and Unity. In addition to teaching herself code, she experiments with praxis-based methodologies for producing media studies scholarship.