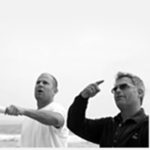 Matty and Caleb met at UCSB as freshman roommates at the Tropicana, and have stayed best friends for over twenty years. Together, they began their writing careers in 1999. Previous to that, Matty and Caleb came to Los Angeles in ’94 and ’95 respectfully. Matty’s mom had written Steven Seagal a fan letter when Matt was in high school in Sacramento, and Steven invited Matt to come visit him on set of his second film for a week. Soon after that, Matt started to intern for Steven during school and then worked for him after he graduated. Shortly thereafter, Matty started working at a small talent agency and within months Caleb was working there as well. Matt then moved to ICM as an assistant, where he was quickly promoted as an agent in the celebrity endorsement department. Caleb left to go to Brillstein-Grey as an assistant and started working with several comedians from Saturday Night Live, from Adam Sandler to Bill Maher to Dennis Miller to David Spade etc…Matt and Caleb wrote their first screenplay MANCHILD at night, got lucky and sold it to New Line Cinema, quit their jobs almost immediately, and have been writing ever since.

They sold a few projects and pitches as well as some punch up work on other people’s movies (Kangaroo Jack, Undercover Brother) which were great experiences. It wasn’t until their friend Greg Coolidge hired them to come up to set to do some rewrites for a movie he was directing, called Employee of the Month, that they got to write as the movie was actually being shot. They sold Four Christmases in 2003, but it wasn’t until 2007 that Vince Vaughn and Reese Witherspoon signed on, which greenlit the movie right before the writers strike of ’07. They then wrote the first draft of SOUL SURFER, a movie about Bethany Hamilton a 13 year old girl who got her arm bit off by a shark in Kauai and is now at 20 a professional surfer. They shot that movie in the beginning of 2010 with Anna Sophia Robb, Loraine Nicholdson, Dennis Quaid, Helen Hunt, and Carrie Underwood, with a release scheduled for early 2011. Currently Matty and Caleb are adapting EAT, POOP, SLEEP about first time parenting for Dreamworks and Walter Parkes/Laurie MacDonald. They’re also rewriting WHO GETS BOB for CBS Films which deals with a friend caught in the middle of her best friend’s divorce, and are pitching a TV show ROBBED about Matty’s father to Dreamworks Television. They also did a one day comedy punch up on RED that their friends Jon and Erich Hoeber wrote.