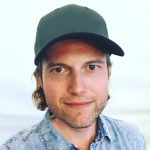 He was born in Berlin, Germany, and has dual citizenship for Germany and Finland. He is the son of the well-known German movie and TV writer Hartmann Schmige. Maximilian Schmige graduated from the American Film Institute with a Masters in cinematography and was mentored by ASC cinematographer Karl-Walter Lindenlaub.