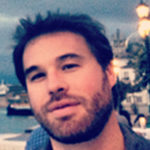 Michael Albright was born and raised in Reno, Nevada and graduated from the University of California, Santa Barbara in 2004 with a BA in Film Studies and English. He also studied Czech film, literature and black & white photography in Prague at Charles University. Shortly after graduating, he moved to New York City and worked with renowned documentary filmmaker Albert Maysles. Albright then returned home to Reno, NV where he started Project Moonshine, a non-profit organization designed to teach filmmaking skills to teenagers by providing opportunities to document important community events. The first feature film, Sonic Youth: Sleeping Nights Awake has been critically acclaimed and screened in top festivals around the world. He recently completed his MA in Cinema and Media studies at UCLA in 2008 and continues to make films and manage Project Moonshine during the summer. His approach to teaching incorporates both theory and practice and he is a strong advocate of media literacy. Albright is currently pursuing a PhD in Film and Media Studies at UCSB and working on several documentaries with his other independent production company, Moonpix. His research interests include, American Independent Cinema, Copyright and Fair Use, DIY and Alternative Media, Documentary, and Media Arts and Practice.