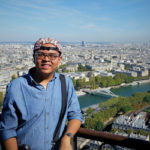 Miguel Penabella is an MA/PhD student in Film and Media Studies at the University of California, Santa Barbara. He received his BA with highest honors from the University of North Carolina at Chapel Hill in Comparative Literature with a second major in Communication Studies. His undergraduate thesis examined the complex effects of temporality on narrative, national identity, and spectatorship in the films of Abbas Kiarostami, Tomás Gutiérrez Alea, and Nagisa Oshima. He is currently interested in theorizations of slowness in cinema, historical memory, and the relationship of politics and style in global art cinema with a particular focus on Southeast Asian filmmakers. In addition to his formal education in film, he has a background in theorizing videogame narrative and game space, having presented and published papers everywhere from USC to UC Berkeley to Playboy Magazine.