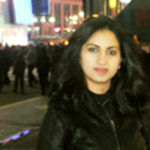 Ouidyane currently holds a permanent teaching position at Chouaib Doukkali University, which is located in her native city, Casablanca. She finished her PhD in 2013. She got her Bachelor’s in English Literature in Casablanca, Morocco. Her Master’s degree is in English Language and Culture, with focus on media and film, which she received in Kenitra, Morocco in 2008. Her Master’s thesis centers on Hollywood cinema and the horror genre; it is entitled “the didactic value of Hollywood psychological horror films”. Her research interests include Arab Media, Transnational media, the representation of Arabs in post 9/11 Hollywood cinema, the localizing of Mexican and American series in the Arab world, using Morocco as a case in point. She is currently an intern at Santa Barbara channels, hoping to gain more production-oriented media experience. Ouidyane loves traveling and meeting people from different cultural backgrounds, and she hopes to contribute to the diverse aim of scholarship in the film department at UCSB.