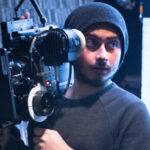 Pratyush Bhattacharyya is an M.A./Ph.D. student at the Department of Film and Media Studies, University of California Santa Barbara. He received his M.A. in Filmmaking at the London Film School, London, UK, after completing his studies at the Film And Television Institute of India, Pune. He holds a B.A. in History from the Presidency College, University of Calcutta, India. As a practicing cinematographer, Pratyush has worked on several films in India, UK, Japan and Bangladesh. His research interests largely involve a historical exploration of the role of cinematography in Indian as well as transnational cinematic experiments, with a close focus on the machinic transformations of the cinematographic apparatus.