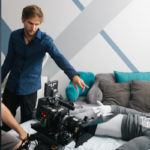 After graduating in 2011, Ryan Turner moved to Los Angeles to work as a freelance director, writer, and editor. Since then, he has made a living directing comedic videos for brands such as LinkedIn, Marriott, Virgin America, and Doritos. He’s also worked extensively with a number of YouTube Channels and Multi Channel networks such as AwesomenessTV, Makers Studio, Defy Media, and Full Screen Media. Currently, Ryan is finishing up a sci-fi comedy short film entitled A Date in 2025 and is working to get his first feature film off the ground.