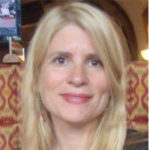 Sandra Joy Aguilar is a curator and archives professional. She began her career working with 16mm student films as curator of USC’s Moving Image Archive. Sandra spent seven years at Industrial Light and Magic where she archived over 150,000 visual effects elements and provided reference images for CG artists. From 2007 to 2012 Sandra directed Warner Bros. Entertainment’s historical paper archive of memos, photographic stills, music scores and production records at USC’s School of Cinematic Arts. She continued her carrer by working in television curating digital content and designing information architecture at CBS Digital in Los Angeles from 2012 to 2014. In October 2014 Sandra returned to the University of Southern California’s Information Technology Services Deptartment to work as Archivist with the USC Shoah Foundation’s Visual History Archive and USC Digital Repository.

Sandra graduated with a BA in Film Studies from UC Santa Barbara and holds a Masters of Library and Information Science from UCLA. With an interest in movie projectors and magic lanterns, she served as past-president of the Movie Machine Society and is a current member of the Tech History Subcommittee of the Science and Technology Council at the Academy of Motion Picture Arts and Sciences. As a member of the Visual Effects Society for many years, Sandra has served on the Board of Directors and as co-chair of the Archives Committee. Her professional specializations include media archive management and creative applications of technology. She volunteers for LA Greengrounds and the Los Angeles Historic Theatre Foundation.