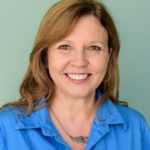 Sara Caldwell is an award winning screenwriter/filmmaker and published author. She’s also a lecturer for Film and Media Studies at UC Santa Barbara and a digital media instructor at College of the Canyons (COC) in Santa Clarita and the Fashion Institute of Design and Merchandizing (FIDM) in Los Angeles. Around teaching, she works as a freelance writer/producer and creates many of her own short film projects.

Sara is the author of the young adult novel RAVEN DOCK (Whitebird Publications) and three industry books, including “SPLATTER FLICKS – HOW TO MAKE LOW BUDGET HORROR FILMS” (Allworth Press). She received an MFA in Screenwriting from CSU Northridge. Previously, Sara was a producer/writer for Amphion Productions in Chicago, Motion Masters in Charleston, W. Va and Worldnet Television in Washington, D.C.

Sara is a member of the Writers Guild of America West (WGA) and the Alliance of Women Directors (AWD).