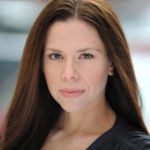 Stephanie Beatrice Dussud was born in St. Etienne, France. When she was 6 years old, her family relocated to Austin, Texas, where she started dance, and later to Mountain View, California. Stephanye maintained a 4.0 in high school and continued jazz, modern, ballet and tap – performing and competing as a soloist and ensemble dancer. She began a BS/BFA double-major in Marine Biology and Dance (Choreography) at the University of California, Santa Barbara and graduated magna cum laude with a BA in Dramatic Art with emphases in Acting and Film Studies. Two days later, she arrived in New York City to pursue an acting career. A member of SAG-AFTRA and AEA, Stephanye has performed in and recorded voice-over for over 125 film, TV and stage productions. She lives in Manhattan, continuing to study with Larry Singer and volunteers with SAG Foundations’ BookPALS and PencilPALS programs for NYC public schools.