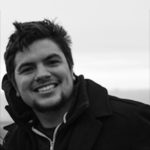 Stephen N. Borunda is a Chancellor’s Fellow and Ph.D. candidate in film and media studies at UC Santa Bárbara. His research focuses on the role of deserts across the Americas as laboratories for modernity’s media and energy infrastructures—particularly focusing on nuclearity in the Chihuahuan Desert in New Mexico and copper and lithium extraction in the Atacama Desert in Chile. His scholarly interests include the energy humanities, the desert humanities, desert sensing media, Latinx and Latin American cinema and media studies, critical infrastructure studies, media and the environment, political culture and revolutionary imagination, and the intersections of media and coloniality. His work has been published with Media+Environment, global-e, Film Matters, The Santiago Times, Media Fields (upcoming), and the upcoming Bloomsbury edited volume Adjudicating Climate Change: Interdisciplinary Perspectives. He was the recipient of the 2022 Graduate Student Essay Award for the SCMS “Media and the Environment Scholarly Interest Group” for his writing on activist media in New Mexico in response to nuclear colonialism.

His writing, research, and teaching have been supported by UCSB’s College of Creative Studies, the Global Latinidades Project, Film and Media Studies Department, and the Chicano Studies Institute. Stephen has also been the recipient of funding from the University of Bologna’s “Academy of Global Humanities and Critical Theory” and the University of Pretoria’s CHCI/Mellon Global Humanities “Institute on Climate Justice and Problems of Scale.” In 2022, he was named an honorable mention for the Ford Foundation’s Predoctoral Fellowship. He is a member of the IHC’s “Re-centering Energy Justice” and a co-organizer of the “Theories of Media and Techniques in the Wake of Postcolonial and Environmental Studies” Research Focus Groups. His work as a graduate student researcher at the Orfalea Center for Global and International Studies has allowed him to partner with activists and artists including the Tularosa Basin Downwinders in their efforts to collect and digitally archive testimonies by local downwinders impacted by the world’s first atomic bomb and filmmaker Francisco Huichaqueo Pérez (Mapuche) based out of southern Chile. He co-designed and co-taught an interdisciplinary course at the College of Creative Studies via the Crossroads Award with English Ph.D. candidate Surojit Kayal entitled “Deserts, Islands, and Other Energy Infrastructures” in the spring of 2023. Stephen’s most recent short film, Boost: A Stop Motion Story, screened at the Festival Internacional de Cine de Valdivia in 2019. He is the coordinating editor of the cutting-edge UC Press journal Media+Environment.

Stephen received his BA with a double major in political theory and history (2014) and a Master’s in education (2016) from Johns Hopkins University. He earned his MA in film and media studies at UCSB in 2020.