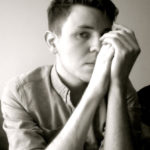 Tyler Morgenstern received his PhD in Film and Media Studies from UC Santa Barbara in 2021. His dissertation, Colonial Recursion and Decolonial Maneuver in the Cybernetic Diaspora considered the points of intersection between the mercurial science of cybernetics and the cultural politics of settlement and Indigeneity in Canada and the United States in the years following WWII. Centrally, the project is concerned 1) to show how established cultural and scientific mappings of Indigeneity informed efforts on the part of early cyberneticians to conceptualize problems of being, behavior, and relation in the post-War period, and 2) to show how cybernetic understandings of information, communication, feedback, and organization shaped how settler governments and publics on both sides of the forty-ninth parallel produced knowledge about and represented Indigenous peoples in the same years. He is co-editor of Moving Images: Mediating Migration as Crisis (Transcript Verlag, 2020), and his writing has also appeared in Media Fields Journal, Synoptique, Media+Environment and International Journal of Communication. Currently, he is Director of Marketing and Communications at the Rotary Centre for the Arts in Kelowna, British Columbia, Canada, and a faculty associate in the Department of English at Arizona State University, where he teaches online courses in the Film and Media Studies program.