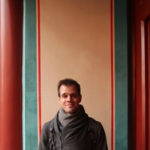 Wesley is a PhD Candidate working in the fields of Chinese film history and media industries studies. His dissertation focuses on the contemporary distribution of imported films in the People’s Republic of China. At UCSB, he has been a member of the Media Fields Collective and a contributing researcher in the Connected Viewing Initiative within the Carsey-Wolf Center’s Media Industries Project. He has presented his research at Peking University, SCMS, the Santa Barbara Global Studies Conference, and Warner Brothers Studios. A co-authored essay of his can be found in Film Marketing Into the Twenty-First Century (BFI, 2015).

Born and raised in the Midwest, Wesley earned his BA at Wabash College and an MA in Film from the University of Wisconsin-Madison. He then moved to China. Over the course of five years in Beijing, Taipei, and Hong Kong, he attended the Beijing Film Academy, Tsinghua University, and National Taiwan Normal University. He also taught film courses at China Agricultural University and Minzu University of China.