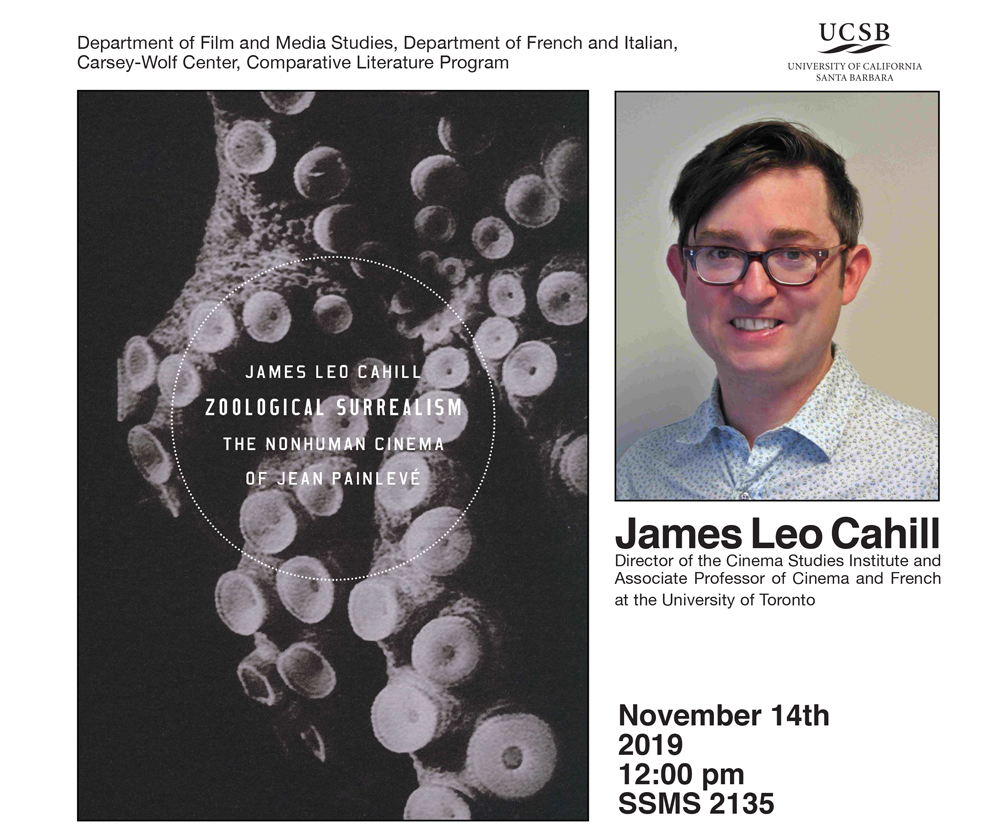 Who was Jean Painlevé and what does a careful study of his short, surreal scientific and animal films offer to the way we approach film history and film theory? This talk answers these questions through a synoptic pass through my new book Zoological Surrealism (University of Minnesota Press, 2019) in 21 archival images. Through the bias of Painlevé’s early oeuvre, I rethink the entangled histories of cinema, Surrealism, and contemporaneous scientific research, and the value of such a trans-contextual approach for the history and historiography of cinema. I also make a theoretical argument about photographic and cinematic media, and what I call cinema’s Copernican vocation, or the use of the cinematic apparatus as an instrument of scientific discovery (Painlevé worked in research laboratories documenting biological phenomena and experiments) and nonanthropocentric displacement (his work also played a key role in the development of a sceptical anthropology in France).

James Leo Cahill is director of the Cinema Studies Institute and associate professor of cinema and French at the University of Toronto, General Editor of Discourse: Journal for Theoretical Studies in Media and Culture, and co-chair of the Toronto Film and Media Seminar. He is author of Zoological Surrealism: The Nonhuman Cinema of Jean Painlevé (University of Minnesota Press, 2019). He is presently working on a book length project on French cinema and literature of exploration (from Le Petit Prince to La Planète des singes) and the conceptualizations of the world, the globe, and globalization in the contexts of collaboration, colonialism, and coca-colonisation. His research has been supported by Connaught and SSHRC grants, as well as the Camargo Foundation (Cassis, France) and the Franke Institute for the Humanities at the University of Chicago, where he was a Center for Disciplinary Innovation Visiting Associate Professor in 2018.