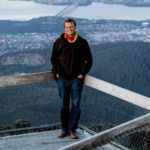 Chris has been behind the lens of several notable documentaries including Sierra Leone’s Refugee All Stars, The Matador, Riverwebs, CAFWA, Marley and Lost Crops. His work has aired on Netflix, PBS, NHK, A&E, Discovery, The History Channel, Travel Channel and Sundance Channel, among others. Prior to receiving his Masters degree in Documentary Film & Video from Stanford University, Chris was in East Africa as a United Nations Volunteer and in southern Chile as an Ambassadorial Scholar.

The Art of Sound

112: Lighting for the Moving Image