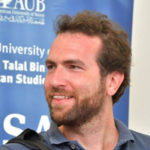 Greg Burris is an assistant professor in the Media Studies program at the American University of Beirut in Lebanon. Greg received his doctorate from the Department of Film and Media Studies at UCSB in 2015. His writings have appeared in numerous publications including CineAction, Cinema Journal, Quarterly Review of Film and Video, and the anthology Futures of Black Radicalism (Verso, 2017). His first book, The Palestinian Idea: Film, Media, and the Radical Imagination, is forthcoming from Temple University Press.

The Palestinian Idea, Media, and the Radical Imagination