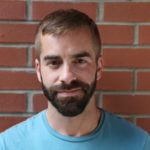 His research is cross-disciplinary and comparative, theorizing and historicizing contemporary media across film, digital culture, television, video, art, literature, and philosophy. His first book, Digital Shift: The Cultural Logic of Punctuation (Minnesota, 2015) examines how punctuation marks and typographical symbols have become increasingly ubiquitous across visual culture and everyday life since the emergence of networked computing. It received the Media Ecology Association’s Susanne K. Langer Award for Outstanding Scholarship. Currently, Scheible is co-editing a book, Deep Mediations, which explores a variety of linkages between depth as a visual concept and depth as a philosophical concept. He is also at work on a research project that traces parallel histories between ping pong and the moving image. Before joining King’s College London, Scheible was an Assistant Professor of Cinema Studies at SUNY Purchase and was a Banting Postdoctoral Fellow at Concordia University in Montreal.