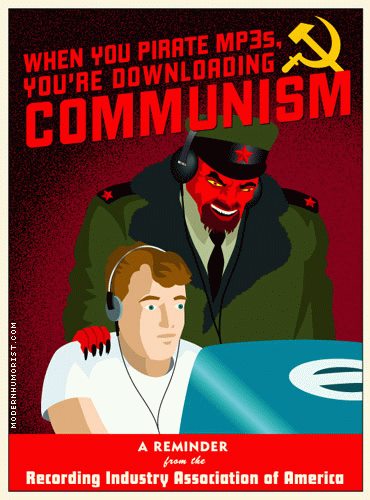 The criminalization of media piracy, which dates as far back as the seventeenth-century yoking of copyright infringements to more violent forms of looting on the open seas, runs up against the romantic allure of the swash-buckling pirate. Whether the rogue booksellers of the eighteenth century or contemporary digital file sharers, the media pirate cuts a hip, antiestablishment figure: at once creative, transgressive, and enterprising. So the search for more demoniacal associations continues, roping in the smuggler, the counterfeiter, the serial killer, and, closer to our times, the terrorist. As the war on terror bleeds into the war on piracy, the dual logics of segregation and immunization that shape all biopolitical paradigms of security increasingly inform reports brought out by government agencies and ostensibly independent think tanks. Securitizing the global population against piratical depredation requires the partitioning of piracy into creative activities (collage, sampling, mash up) that produce something new and acts of mere poaching that add no value. This demarcation is mapped onto the planet: large parts of Asia, Africa, and Latin America—the historically constituted Global South—are marked as problem zones for the global governance of intellectual property. Within these regions, there is a widening chasm between neoliberal elites and the relationally subaltern masses in their adherence to IPR (intellectual property rights) regimes and their attitude toward piratical activities. Starting with the liberal distinction between productive and unproductive forms of media piracy, a distinction that shores up a geopolitics of legality with Asia as its wild and recalcitrant outpost, this article explores the implications of the gap that opens up between legality and legitimacy. In the absence of hard evidence from the informal “survival” sectors, the article draws on ethnographic and anecdotal evidence to explain the lack of political will in enforcing IPR laws. Taking into account the myriad ground-level practices around media forms and platforms, the concept of global media is reconsidered. Finally, the article ends with two takes on the framing of piratical activities as “parasitical.” First, it argues that the “third” of Third Cinema now lives on in these “Southern” piratical practices. Second, in a more speculative vein, it argues for a development of the parasitical as a framework for apprehending the creative potentiations of media piracy beyond the confines of bourgeois legality.